Summarized narrative given by Dale Spears and Celia Fry during our 70th anniversary luncheon. 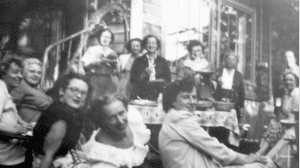 Since 1948! See 2008 Port Townsend Leader news article summarizing our first 60 years — 2008 AAUW Port Townsend 60 years old. For 70 years, we have been working for equity and opportunity for women in this county. We have taken our lead from AAUW national and we have followed our own hearts in a variety of community projects. In 1948, Edith Miller and Dorothy Meyers and about 35 other women founded the Port Townsend branch of AAUW. They got busy right away, raising awareness and bringing culture to the area. In that first year they started a preschool, sponsored a Girl Scout troop and brought culture to PT with an art exhibit from the SAM and a play from UW. They also raised money to sponsor a local theater group that ultimately became Key City Players 20 years later.

In 1948, women accounted for less than 24% of college graduates and the branch members wanted to encourage local girls to go to college, so they sponsored a tea for graduating seniors. They wanted to honor girls for graduating from high school and to encourage them to go to college. They supported the AAUW national scholarship fund, and a summer school for the arts at Fort Worden. They also supported various women’s issues and worked to get out the vote of women through voter registration.

Membership really began to take off in the late 80s and 90s. In 1991, membership stood at 121. The branch could no longer meet in people’s homes and branch meetings were held at the Yacht Club. The branch was instrumental in holding workshops for the community and teachers to raise awareness about breaking barriers for girls and women in schools. They were visible at school board meetings and lobbied for equal access for girls in educational programs. The Freshman teas had become workshops for girls to explore college and career opportunities. These “Expanding Your Horizons” workshops at Port Townsend, Chimacum and Quilcene schools became what we now call Career Day. We are active in both PT and Chimacum school districts, serving more than 200 students each year in math and literacy programs.

Most dear to our hearts is the scholarship program that began with a single $100 scholarship more than 40 years ago. Over the years, our gifts to local women have grown and grown. In 1994, UWF/University Women’s Foundation was founded to keep the money we raised for scholarships for local women instead of sending it all to national. The first Annual Academic Scholarship of $1000 in 1994 was given to a student to help her continue her education in the field of nursing.