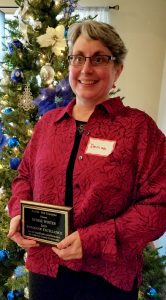 At the festive branch holiday luncheon December 2018, Denise Winter, Artistic Director of Key City Public Theatre was named as the 2019 Woman of Excellence. Denise has a long history in the theater wearing numerous hats, many of them on artistic staffs, working with many different groups around the world from the New York City Opera to Nickelodeon to the Radio City Christmas Spectacular starring the Rockettes.

Since coming to Port Townsend 12 years ago and becoming Artistic Director of Key City Public Theatre, she has directed, choreographed and starred in over three dozen productions. Her efforts have garnered numerous awards and honors. Equally as important, KCPT has become recognized as a regional theatre where aspiring actors, directors, writers and the like may find a place to learn, grow, hone their talents and build their resumes. The TeenLab, Shakespeare Summer Camp, and teen playwrights workshop are a few of the many avenues through which she has supported young people interested in the performing arts.

Beyond KCPT, Denise has made major contributions to the PT community through The Port Townsend Main Street Program, PT Arts commission, the City Lodging Tax Advisory Committee and her willingness to serve as emcee for a number of different events, including the Wearable Art Show.

As her production manager said: “I see the daily challenges she faces head on with tenacity and intellect. I have witnessed the large scope of Denise’s excellence which bridges the gaps between theatre, business, friendship and community”.