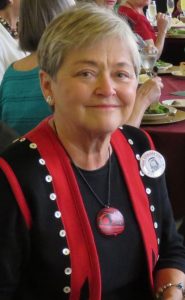 Celeste Dybeck, Project director for the číčməhán Trail project, was named this year’s Woman of Excellence. Under the auspices of the Native Connections Action Group of the Quimper Unitarian Universality Fellowship, Ms. Dybeck led a team which following permission from the Jamestown S’Klallam Tribe, worked for two years to bring the trail to life and completion. Her tremendous effort and accomplishments were recognized with a standing ovation during the dedication ceremony for the Trail. [More about the Trail development, see the bottom of this article…]

In addition, she has spent two decades working to improve the quality of life for fellow Jamestown S’Klallam Tribe members as an Elder, educator and volunteer on the board for Economic Development. For many years, Ms. Dybeck both served on the Board for the Peninsula Red Cross as well as provided disaster relief both locally and nationally.

Says Michael Kubec of the selection committee “For the first time in a number of years, this year’s winner is a current AAUW member who is known to many of you for her warmth, her friendliness, her humility, her compassion and her dedication to the Native American Community, particularly the Jamestown S’Klallam Tribe. I am thrilled to announce that Celeste Dybeck is our 2020 Woman of Excellence.”

Having trained as a nurse and worked as a Department Head in charge of all the nursing staff at the Urgent Care Clinic at Group Health, Celeste was well suited for her long-time work in disaster relief for the Red Cross where she applied her skills both locally and nationally. For many years, she has served on the Olympic Peninsula Red Cross Chapter Board of Directors. One colleague commented that Celeste could serve as the Red Cross poster girl for the energy and enthusiasm she has brought to her volunteer work. 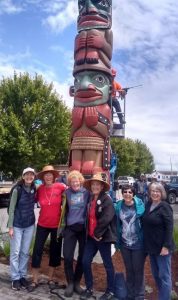 After gathering a team of six others, Celeste skillfully managed the talents of the team to solicit the best from each member. Of the two years that the project took, she kept it moving forward. Implementing the project required negotiation with a myriad of organizations including the city, county, state, Port of Port Townsend, federal government, schools, community organizations and private property owners. She forged partnerships between the organizations and the Tribe which created openings to communication not previously occurring that continue beyond the immediate project.

The resulting číčməhán Trail, also known as the Chetzemoka Trail is an historical, educational masterpiece which is a source of pride for the entire community. The stunning totem pole which sits outside the Northwest Maritime Center, a gift from the Tribe, is another example of the strong partnership between the Jamestown S’Klallam Tribe and the Port Townsend community. Celeste played a major role in this partnership.