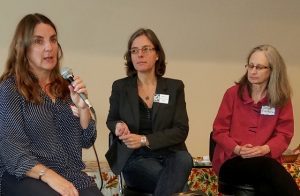 2017/18 is our branch’s 70th year.
September 2017 meeting kicked off our year. We gathered by neighborhood groups to discuss AAUW’s programs and history and meet new members.

We help support heroes in our midst. We will honor our students returning from the summer Tech Trek.  (click here to read more about Tech Trek…) They will share their experiences with us. And our spotlight presentation was about Educating our Children for a Better Future – our Math Program in Port Townsend.

Catered luncheon, warm atmosphere, and presentation of the award to this year’s community Woman of Excellence.

Bears, Cougars, Coyotes, Wolves: The Politics of Conservation. Executive Director of the nonprofit wildlife conservation organization, Western Wildlife Outreach, (WWO) discusses the science behind the need for large carnivore education as well as why education and understanding are key to large carnivore survival in a changing world. 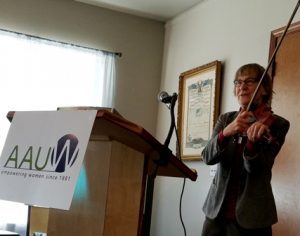 Art as Transition – We continue with our theme Heroes in Our Midst with a focus on Art as Transition. Our forum includes three amazing local women who are making a difference in our local arts programs. They will discuss and share examples of how their work has made a change in the lives of others. Martha Worthley is the Program Manager for Centrum’s youth programs, collectively called The Young Artists Project. Linda York volunteers at The Gathering Place on Art Day, known to most other volunteers as Tuesday. She works with participants and weaves together with them. Kristin Smith has played violin in symphonies and chamber groups in Montana and Alberta before coming to Port Townsend. Now she is actively teaching and involved with Centrum’s Fiddle Tunes Festival.

Building a Better Community. A panel of three accomplished and active local women whose work builds a better community in East Jefferson County. Katherine Baril was Executive Director of the Washington State University Extension for 25 years in Jefferson County. Crystie Kisler lives and works at Finnriver Farm & Cidery in the Chimacum Valley.  Siobhan Canty is the Executive Director of Jefferson Community Foundation whose mission it is to support, strengthen and connect the efforts of local nonprofits, donors and volunteers.

Young Women Deserving our Recognition and Support. Please join us to honor our young heroes, our scholarship recipients for the school year 2018/19. 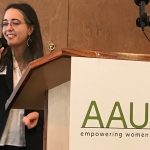 Also on this day, many AAUW members throughout the state  supported the women’s marches in Seattle and Port Townsend. Read more about this event on Facebook.

March 2017
Women in Charge – Women in Boats
One boat, eight fearless women — the 2016 Race to Alaska. Port Townsend resident Kim Carver was one of those women and she shares her experiences aboard the 23′ open dory in which they set off last summer

April 2017
Women in Charge – They Saw the Need and Stepped-up
April features Three Women In Charge who will discuss the beginnings and the work of organizations which contribute greatly to the local good. Martha Olbrych, Co-President of Working Image, Jean Camfield from Habitat for Humanity, Teresa Verraes one of the founders of The Boiler Room, now Executive Director of the Jefferson County Chamber of Commerce and has led the charge for the Young Professional Network in Port Townsend. 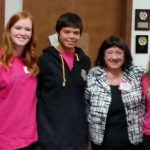 November 2016
Women in Charge – Women in Radio
At our November meeting we learned wisdom from Women in Radio: Dalana Lynwood, Maryanne McNellis, and Cris Wilson, all hosts on KPTZ, 91.9, our local radio station. 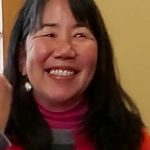